(Originally posted on our 2012 Field Blog — posted by Renee, content by Sean) 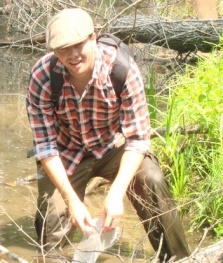 When my intern George Brooks showed up (pictured at left), I wanted to take him for a test spin. He’d already shown a lot of gumption by contacting me about doing fieldwork during the summer of 2012, and at first I tried to turn him away, since I knew we couldn’t afford to pay him. I don’t agree with researchers who have people working for them for free, so I told him to look for a paid internship and that if he still couldn’t find one we’d look into it further. He eventually wrote me back that not only were there no paid internships, they were actually expecting him to pay them to do an internship. To make a long story short, we got him over here from England to do field work within Conecuh National Forest. One of the main things I wanted him to do–besides helping with the various Fence Lizard projects going on–was to help me document new or unvouchered species for the forest. Since vehicle availability for him would be tricky at times, I expected him to be able to go do some productive herping right around the field house. I poured over topo maps and found that the creek draining Rome Pond (Blue Creek) flowed north right into the Conecuh River, and that there was a lot of nice topography up that way, probably indicating good hardwood forests. Many of the species I wanted to find–Brown Snakes, Worm Snakes, Queen Snakes, and Fowler’s Toads–are common species further north in Alabama but rare in Conecuh, and I thought they might be lurking in the hardwood forests north of U.S. 29.

Hwy 29 forms an improbable biogeographic boundary within Conecuh National Forest because it lies along the divide between the Conecuh River to the north and tributaries of the Blackwater River drainage to the south. As such, several species usually found much further to the north in Alabama (Fowler’s Toads, Northern Cricket Frogs, Marbled Salamanders, Worm Snakes, Timber Rattlesnakes, etc.) reach their southernmost range limits at the Conecuh River and Hwy 29, which has suitable hardwood forest habitat for them and allows them to trickle south along its length like a corridor. Likewise, several species which are common further south at places in the Panhandle of Florida (e.g., Pig Frogs, Coral Snakes, Diamondback Rattlers, Pine Snakes, etc.) are less common or absent above Hwy 29.
Knowing how bad creek bottoms can be in these parts, I decided we’d both walk along Blue Creek down to the river and back to check it out. It looked to be about 2.5 miles to the river, a total of 5 miles. If he was tough, he’d have no problem. We set forth on our hike during the worst heat wave of the summer (July 1, 2012), so we got up early and left the house at 7 A.M. We packed some snacks and some water, expecting to be back by lunchtime. We descended from the mucky headwaters behind Rome Pond’s impoundment, weaving through dense shrubs and vines. Just beyond this the creek met a large seepage area, complete with thick accumulations of sphagnum moss. We turned logs briefly at this area, finding Dusky Salamanders and a Ringneck Snake, and I filed away the spot in my head as a likely place to find Mud and Four-toed Salamanders in the future. Already this reconnaissance was paying off.
We crashed through a thick area of sinister and well-armed bamboo vine and bays, and the creek quickly slinkied down to a smooth, white bed. We walked a few kilometers with the creek as our trail, splashing along in the brilliant clear water. As long as we stayed in the bed, it was easy going. The creek was a typical cool, whitewater stream of this part of Alabama and the Panhandle of Florida. The banks were grey, silty clay adorned with filmy ferns. We only had to occasionally dodge hanging briars, hurdle fallen trees, or duck walls of shrubs. I checked on George occasionally, asking him what he thought.
“Gorgeous.”

We descended lower and lower along the creek, as it wound around in lazy arcs toward the Conecuh River. At one point the creek dashed over the ledge of a tan, pitted limestone outcrop, forming a short but pretty waterfall. The stream’s edge was guarded by seven coiled Cottonmouths (above, credit: Sean Graham) in their characteristic ambush posture, and at one point I ducked under a blooming swamp honeysuckle–a white flowered azalea found more typically in cold rivers of northern Alabama. I felt the white corolla tube of one flower and it was nice and sticky, thus the name Rhododendron viscosum. I started scanning the shrubs along the creek, a good way to spot a basking Queen Snake. However, I explained to George that I didn’t really think it would work, since I only ever seem to see them basking in northern Alabama. Down here they probably get as warm as they need to get in the water of the creeks, and that’s one of the reasons they’re so hard to find–they don’t bask as much as they do in cooler climes. I certainly didn’t expect to find one during the hottest week of the year in south Alabama. So of course I found one. 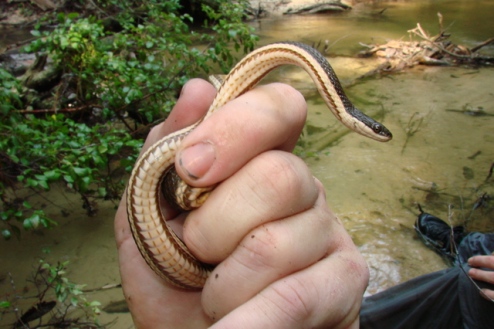 I noticed a thin, tiny tan vine along the length of a small shrub branch perpendicular to the edge of the water.  Something about the vine made me study it a little longer. It wasn’t a vine, but instead what came into focus was the thin stripe of a gorgeous, olive, basking Queen Snake. I carefully unbuckled my field bag from around my waist, placed it on a log in midstream, and rushed in toward the snake. At the last minute it deftly unfurled from the shrub, and for a panicked moment I was unsure whether I had it. But I did. I held it up triumphantly toward George, who came over to see what I’d found. I was grinning and hooting, things that often follow a good find. I’d been talking about Queen Snakes a lot, so he knew the whole story when I told him what it was. I snapped pictures of it on the bank. It was a she, and a very fat she–the snake was clearly pregnant with little developing embryos. Queen Snakes, like all North American natricid snakes, are live bearers, and this particular species has one of the most specialized diets of any snake: they eat only recently molted crayfish. And now we had a second chance to formally voucher the species from within Conecuh National Forest. We bagged it as insurance (in case the camera went into the creek) and continued our trek.

I started getting the feeling we were getting close to the river. Up ahead there was what appeared to be an opening. But the creek just kept on winding. Like Christopher Columbus sighting signs of land, we began seeing sure signs that the river was right around the corner: a Largemouth Bass, a River Cooter, an old wooden bridge. Still, the river didn’t appear, and as our drinking water ran out, the creek became deeper, its banks steeper. But the walk was still pleasant, and as the rushing water from Blue Spring joined our creek the terrain became truly enchanting. The steep banks of the creek were cloaked with a mature beech magnolia forests and sheer bluffs covered with angel hair ferns; surely this area would turn out to be the haunt of Worm Snakes and Spotted Salamandersif we could just find them.  Gurgling springs bubbled out of the sides of the banks in places, making any worry about drinking water unnecessary. Finally, the creek became waist deep, the sand began shifting heavily under our feet, and the sandbar marking the confluence of Blue Creek and the Conecuh River appeared. It was one o’clock.

Sean and George found a Queen Snake – but what about Worm Snakes, Brown Snakes, and Fowler’s Toads? What surprises await at the Conecuh River, and will they make it back to Rome Pond unscathed? (This is the “Blue Creek Death March”, after all.) Tune in next week to find out in the much-anticipated, final installment!