Fence lizards, fire ants, and wood frogs are certainly the current stars of the Langkilde Lab. While their names may be on the marquee, there are a number of other players with small – but important – parts in our lab. Eastern newts, chiggers, valley-and-ridge salamanders, green iguanas, and jumping beans are just a few of the critters who have turned up in various projects. My favorite supporting character in my work, however, is the dragonfly larva. 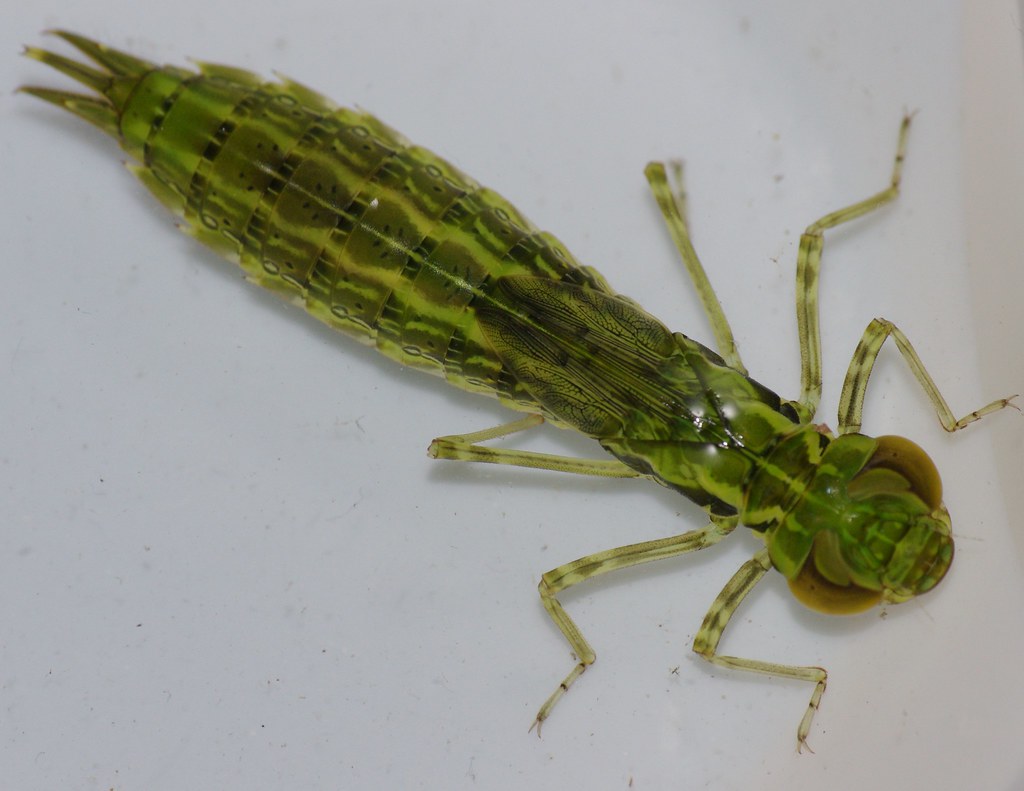 Most people are familiar with dragonflies as aerial predators, welcome almost everywhere for their voracious appetites for mosquitoes and other pesky insects, which they deftly intercept in mid-air with remarkable accuracy (link). But their predilection for hanging around wetlands and ponds hints to a lesser known aspect of their lives. Their young, called larvae or nymphs, hatch from eggs laid on submerged aquatic plants and develop under water before climbing out and emerging from their shed exoskeleton as a flying adult. During the larval stage, however, dragonflies spend their lives feasting upon small aquatic animals with similar gusto as the adults. (In fact, baby dragonflies also like to eat the aquatic baby mosquitoes, giving mosquito populations a one-two punch). Some types of dragonflies, particularly the “darners” (family Aeshnidae), are also some of the most voracious predators of my primary study subject – tadpoles. In several projects, I’ve used the larvae of Anax junius (aka, the green darner) as a predator of tadpoles. Anax dragonflies grow rather large and are perfectly equipped to eat even fairly large tadpoles. And the tadpoles know it – I and other researchers have documented well how tadpoles that detect a dragonfly feeding on other tadpoles exhibit strong antipredator responses, becoming less active, hiding more, and growing larger tails. But how do these dragonflies, with their apparently small jaws and bodies that lack any fins for swimming, manage to feed on tadpoles?

He doesn’t look too dangerous …

This is the cool part. First thing to know is that dragonfly nymphs dart very quickly through the water by means of jet propulsion. They draw water into their expanded abdomen to breathe, but when they need to move quickly they force this water rapidly out of their anus by compressing the abdomen and increasing the internal pressure. A stream of water jets out with enough force to rapidly launch the dragonfly forward and, if it is out of the water, can wet your face like a squirt gun. This helps them catch tadpoles, small fish, and other prey that move much faster than the dragonflies can crawl. I’ve watched dragonflies shoot out from their perch into the open water to snatch a tadpole, and then casually wiggle their legs to help them drift back to their resting place.

When it comes time to actually grasp the prey, the larval dragonfly has another trick up its sleeve. Beneath its mandible (mouthparts proper) is a labium – an arm-like structure with sharp hook-like claws at the end. (In some dragonflies, the labium has a less menacing shape more suited to catching plankton). The labium remains neatly folded under the dragonfly most of the time. When prey is near, the dragonfly again compresses its abdomen to produce hydraulic pressure. This time, however, a sphincter muscle in the anus prevents the water from exiting and propelling the dragonfly. Instead, the labium is forced forward by this pressure, unexpectedly extending the reach of a dragonfly that seemed to be at a safe distance. The claws at the tip of the labium grab the prey and pull it back, where the mandibles can begin to tear it apart to be swallowed. The labium holds onto the prey with its recurved hooks so the dragonfly can handle a very large prey item (even one still struggling) while the mandibles go about eating it at a relatively relaxed pace.

As someone who loves tadpoles, you might think Anax wouldn’t be at the top of my list of favorite creatures. But I’m far too impressed by how these little ‘bugs’ manage to terrorize the pond with their remarkable adaptations, instilling fear in tadpoles and other potential victims. In fact, “anax” means “king” or “military leader” in ancient Greek – a name that certainly suits these tyrants ruling over their aquatic kingdoms.

While on a quick Spring Break trip, I needed to get a herp fix since I’ve been stranded in a land of ice and snow (errr, State College) for the past four months. Alabama to the rescue. While I mostly just hiked in the glorious (to me) 65-70 degree weather (and did manage to actually get a sunburn on my pasty white arms), I did see some herps along the way, whether by flipping a random rock and log or just stumbling across the odd lizard. Here are some quick pics to tide you over the next month or two until spring unleashes warm enough weather for the herps to come out in force a little farther north.

My first fence lizard of the year! This lady was quite cold but basking at the base of a tree trying to get a jump on her activity season.

After quickly catching the fence lizard (hands only…how a real lizard ninja does it!) I contemplate just how the heck I’ll set up my projects this summer.

Fire ants were still active as well, although they needed a little motivation (errr, an attacking stick) to get them to show themselves in the cooler weather.

A seal salamander (Desmognathus monticola) works on its tan streamside in the mountains of northern Georgia.

Another desmog takes a peek out of the stream to cast a wary eye at the bumbling human who just pulled a rock away from its burrow mouth (I put the rock safely back).

A marbled salamander (Ambystoma opacum) squints its eyes in the bright light after being found underneath a log in southern Alabama.

Welp, that’s all for now! Hopefully a panoply of critters will be out here in PA soon enough, and we’ll be rolling in fence lizards (and hopefully not fire ants!) in the near future.

Today I thought it would be fun to share with you something a little different.  I recently visited Berkeley, California, and while there I stumbled across a fantastic example of applied ecology.  After a long day of planes, trains, and (unfortunately no) automobiles, I took a refreshing walk to McLaughlin Eastshore State Park—as far west as you can go in Berkeley before falling into the San Francisco Bay. Awesome—finally some nature and a chance to recharge. Like any good ecologist, I poked around for a while, and watched egrets and gulls around the mudflats as the sun set over the bay.  Naively thinking to myself, “Gee, how swell that the city kept this natural area so nicely preserved!”

Looking back over the Berkeley Meadow to Berkeley. Photo credit: L Swierk

Except… I was entirely wrong. Maybe I should’ve been clued in by the odd shape of the shoreline on the map, and how darn close it was to an old-timey train. After an hour of pleasant investigating, I wandered up to this sign, entitled “What are you standing on?”:

Landfill. Well. A little additional research turned up some information that this was essentially an old hazardous materials dumping site. Did this change the enjoyment I felt from my wildlife-watching and wandering? Heck no. I grinned and felt nerdishly overjoyed at this feat of reclamation. Had I never been told, I would never have guessed. What an awesome success story—they fooled an ecologist!