Hello, my name is Heather Engler. I have been working as a research assistant in the Langkilde lab since May 2016. And yet my background is not in biology. Instead, I have a B.S. degree in Accounting from Murray State University. So how did I wind up going from business to biology?

I began dating Dustin Owen, my boyfriend, while he was at Austin Peay State University. I was fascinated with his reptile research because I have always enjoyed learning about animals. So I naturally took an interest in his new eastern fence lizard research here at Penn State. I was really lucky that Tracy Langkilde didn’t mind me spending time with Dustin in her lab. I got to learn about all sorts of things from various lab members.

Last summer, Dustin and some of his new lab mates caught lots of eastern fence lizards to be used in their research projects. They were busy with their research, so they needed someone else to take care of the lizards on a daily basis. Since I had not landed an accounting job, Dustin put in a good word for me with Tracy. Luckily, she was willing to give me a chance.

I absolutely loved taking care of those lizards last summer! Some of the females became gravid, and I got to help collect the eggs after they finished laying them. After all of the females had laid their eggs, it was time to incubate them in the lab. One random day in July, I was checking on the eggs and noticed some tiny bodies. The first of the eggs had hatched! It was so cool because the hatchlings were so little compared to the adults. Since we were short staffed at the time, I got to help record the morphology data on the hatchlings. I even learned how to toe clip them. I had never done this kind of work before, so it was a fun learning experience.

Since I had done such a good job with the adults, Tracy let me also take care of the hatchlings. And it has been a blast watching over those lizards. It won’t be too much longer until they’re fully matured adults. I’m even getting to help on a side project concerning them. Braulio Assis, one of the current grad students in the lab, has been taking photos of the juvenile lizards at 9 week intervals. One of the things he wants to know is if testosterone levels are related to the size of male cloaca scales. I’m helping to answer this question by measuring the area of the male cloaca scales in the photographs of the male juveniles. I get to use this really cool software, called ImageJ, to trace around the scales in order to get the measurements. 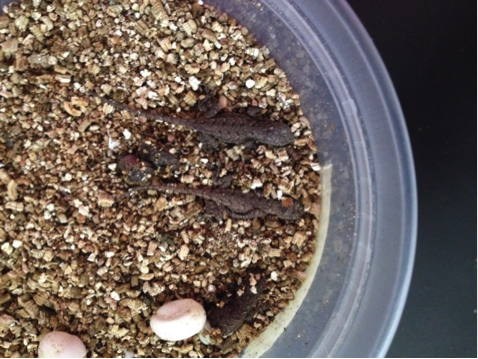 If you had told me 5 years ago that I would go from working in the accounting department of an engineering firm to working in the lab of a world famous biologist, I wouldn’t have believed you. But here I am. I have moved from business to biology, and I couldn’t be happier.

[posted on behalf of Heather Engler]